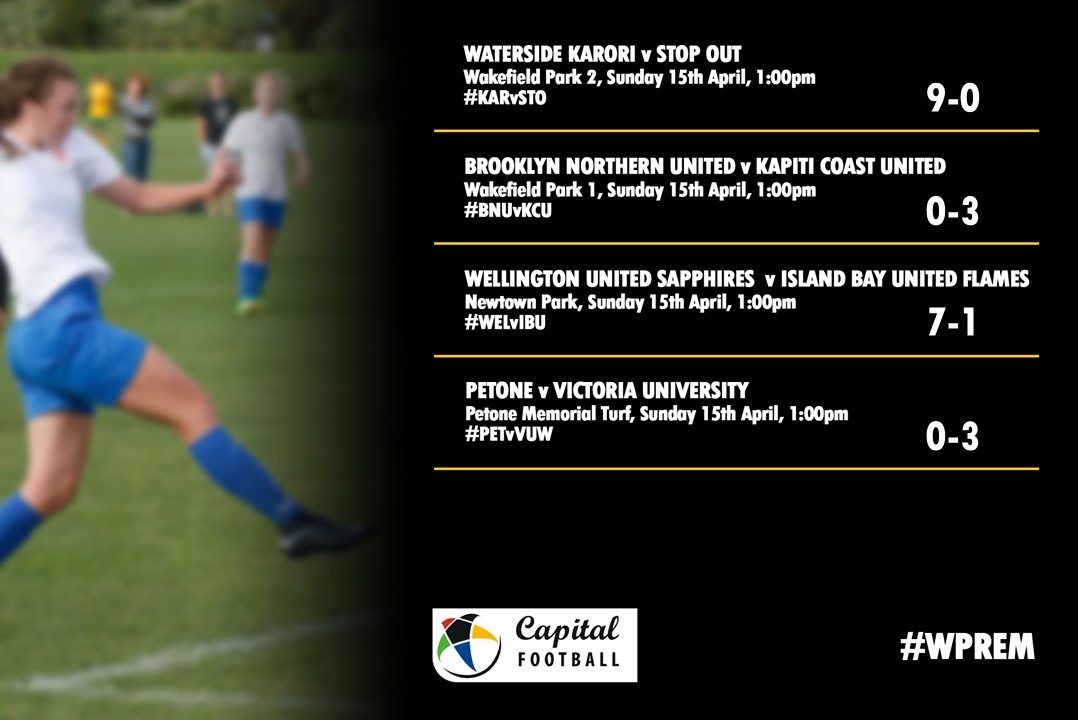 With only a handful of players from their squad that competed in last season' W-League, Stop Out's rebuild in the Women's Premier competition hit a roadblock in the form of a rampant Waterside-Karori team. Both Courtney Stone and Millie Lynskey put four in to the back of the net as the Wharfies won 9-0. They are yet to concede a goal.

Fellow pace-setters, the Wellington United Sapphires, conceded their first goal of the season but they followed last week's 9-goal effort with 7 against Island Bay's Flames.

Victoria University complete the league's compliment of unbeaten teams, quietly going about their work with a 3-0 win over Petone. Petone will be searching for their first win, and first goal, of the season next weekend when they match-up against Stop Out, who share their goal-less, win-less record.

A brace from their leading-scorer, Martin Bueno, and a 23rd-minute strike from Sho Goto had them well in control early in the first half at Wakefield Park on Saturday.

Gavin Hoy gave Olympic a brief glimpse of hope when scoring in the 54th minute, but 3-1 was how the score stayed as Napier moved to nine points, three clear of Olympic, Stop Out, and Wellington United, who have a game in hand.

Stop Out were beaten by last season’s runner-up, Waiarapa United, 2-0 at Hutt Park. Shakille Belle and Paul Ifill got the goals midway through each half.

Things are also congested in the Capital Premier division, with three points between leaders North Wellington and seventh-placed Miramar Rangers reserves after the weekend’s action,

North Wellington eased their way past Olympic’s reserves 3-1 thanks to goals from Ryan Worrall, Callum Goodwin, and Patrick O’Keefe to keep their undefeated record intact after three matches.

Island Bay United stunned Upper Hutt City 7-0 in their clash, while Petone get their season back on track with their first win, a 4-0 triumph over Lower Hutt’s reserves thanks to a hat-trick from Alexander Shepherd-Reynolds.

The W-League threw up some interesting results from the second-round action.

Newcomers Western Suburbs will be happy with their 3-3 draw against last season’s contenders Palmerston North Marist. Maya Hahn showing her class for Wests with a brace.

Seatoun very nearly got the better of the powerful Wellington United outfit, before succumbing to a 2-1 loss, while Wairarapa United continued their strong start to the season with a 1-1 draw against defending champions Upper Hutt City after the hosts conceded a 93rd-minute own goal at Maidstone Park.

The results were an indicator that it might be a much tighter league than last year, when Wellington, Upper Hutt, and Palmerston North were clearly superior to the other three teams.