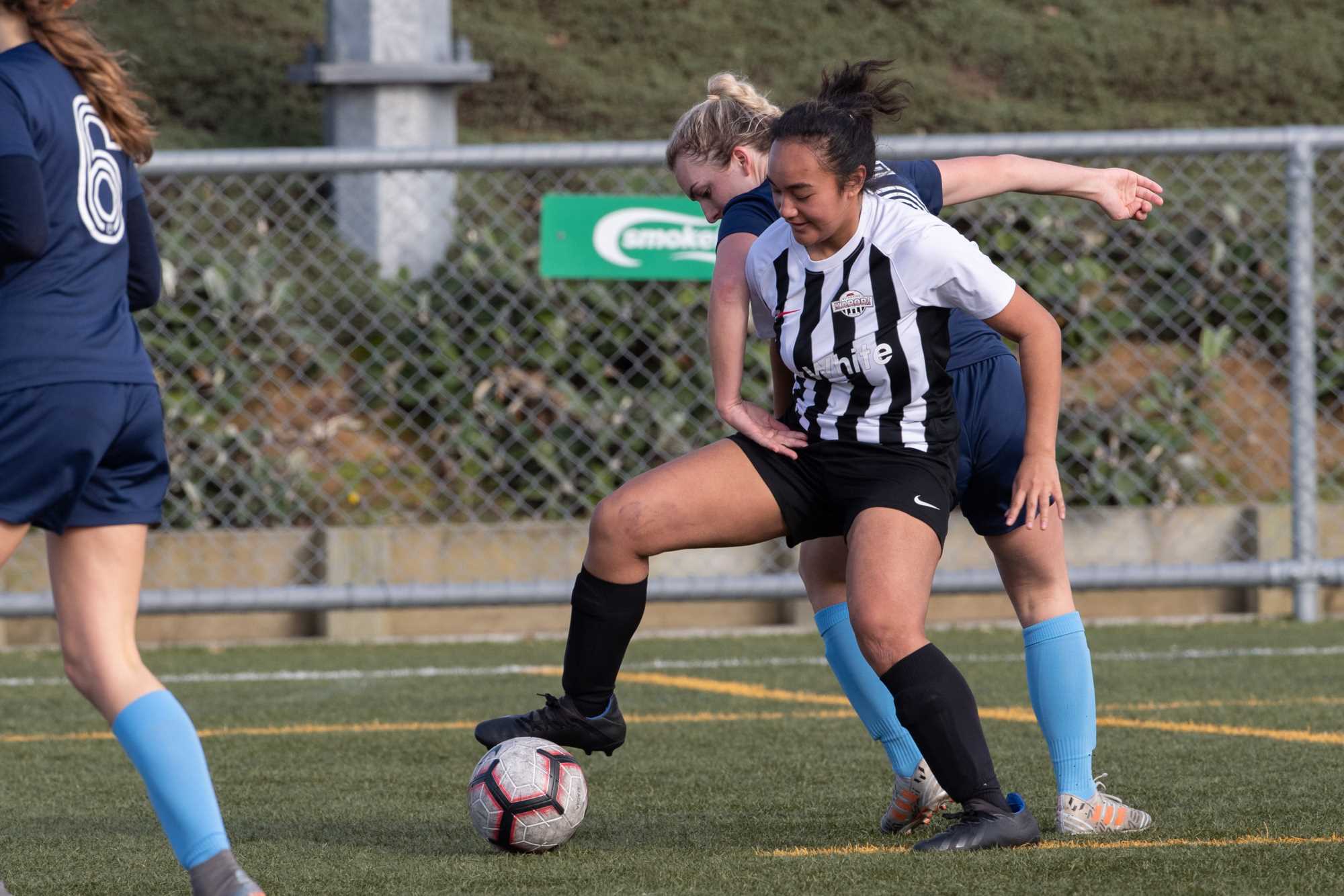 Wellington United looked on track for all three points following a first-half brace from Jemma Robertson which had them up 3-1 until the 83rd minute, but goals to Mikaela Boxall and Charlotte Lancaster ensured the hosts grabbed a point from the game.

The draw meant Waterside Karori moved to within two points of the leaders following their 2-0 win over North Wellington. Denise Gumabay and Emma Kruszona scored the goals in the first half.

A Samantha Whyte hat-trick helped Wairarapa United to a 7-1 win over Seatoun, while Libby Boobyer matched that goal-scoring feat in Petone’s 5-0 win over Western Suburbs.

Of note, there were no yellow or red cards issued across all four W-League games this weekend. 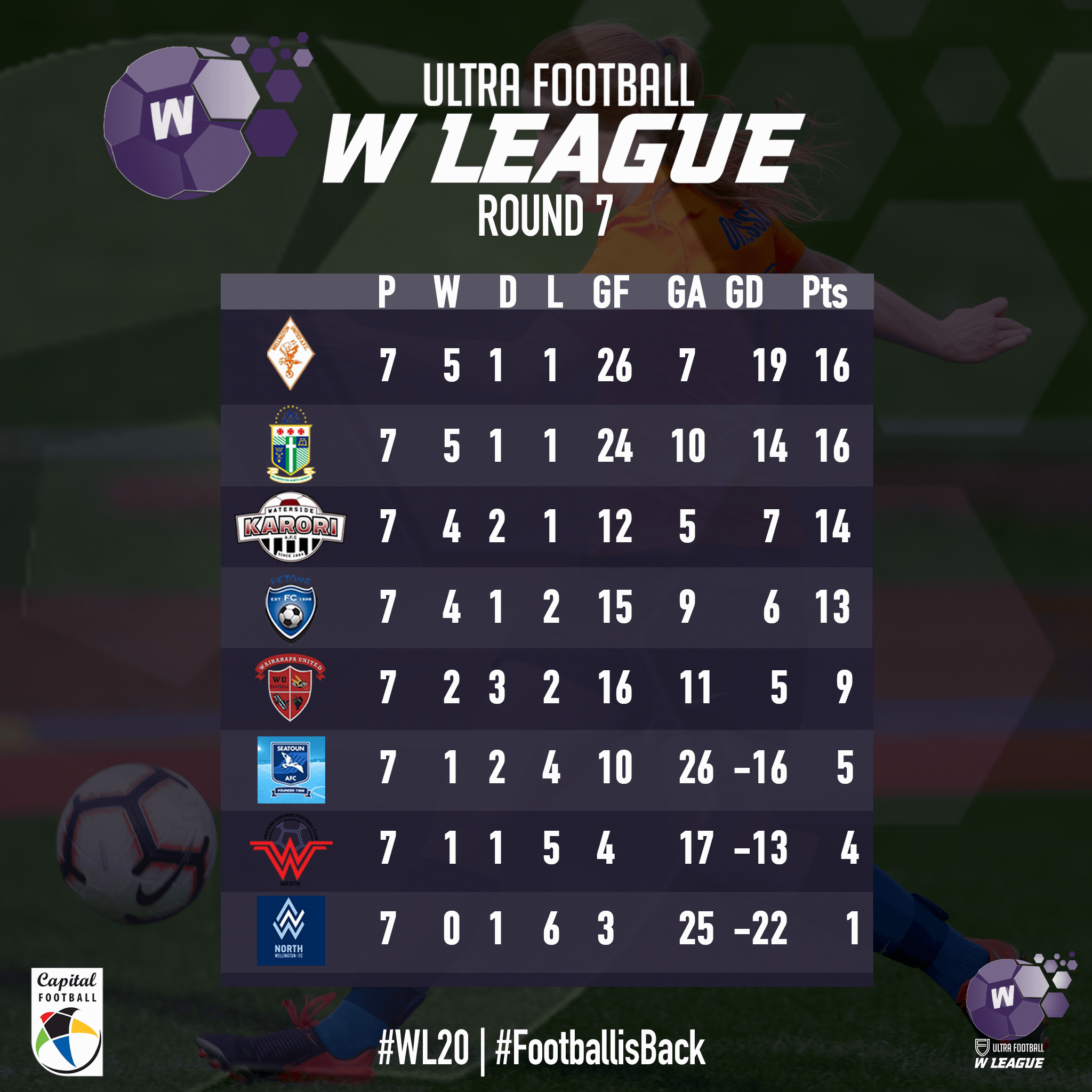 In the Ultra Football Central League, Waterside Karori moved out of the relegation zone after a 4-2 away win over North Wellington. Jarrod Stant scored a hat-trick in the win.

That result moved them ahead of Wairarapa United on goal difference, who did well to hold on for a 1-1 draw against Napier City Rovers after playing with nine men for much of the second half when Joshua Rudland and Connor Turton were sent off in the 66th and 73rd minutes respectively.

Miramar Rangers stayed top of the table on goal difference after a 4-0 win over Stop Out. Joao Moreira, Ollie Whyte, Andy Bevin and Sam Mason-Smith got in on the goals, with the final three coming in the last 15 minutes.

Western Suburbs remained level on points with Miramar after Otto Ingham’s goal earned them a 1-0 win over Lower Hutt City on Friday night in a match that was livestreamed.

Wellington Olympic’s season revival continued with a peach of a hat-trick from Jack-Henry Sinclair helping them to a 4-0 win over Petone.

Sinclair scored two freekicks from outside the box, while the other goal came at the end of a sweeping move from Olympic which started all the way back at the feet of their goalkeeper near their own goal.

Around the grounds, In Capital 1, Miramar had a good away win over Tawa, with Charles Atkinson-Kos getting a hattrick.

Naenae and Marist battled out a 4-4 draw in Capital Two, with Mitchell McCloskey getting an equaliser for Marist in the 89th minute.

The Petone Untouchables were untouchable on Saturday winning 10-nil in Wellington Three.

The Wainuiomata Roundballs, in their 34th season together, celebrated a good 7-0 win at the weekend, and also plan to celebrate an old-timers day on the 15th of August.

In Horowhenua-Kapiti One, KCU Hearts made it six wins from six games.

Masterton Lions’ great start to the season continued with a 10-nil win over the Wairarapa Evergreens, in the Wairarapa Third Division.

In Masters One, the top of the table battle between Karori and Wests finished 1-1.

The Under 17 Capital Development grade (first round) was won by Lower Hutt City.

The Women’s Three grade started their second round, with Lower Hutt City having an impressive 11-1 win.